Bid Specialists pedal up their support for Josh Quigley, The Tartan Explorer 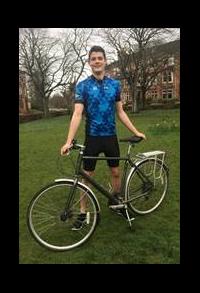 It’s startling to learn that 2 people die in Scotland every day because of suicide and that it is the biggest killer of men under 35.

To tackle this, a global suicide prevention movement has been initiated by Josh Quigley, The Tartan Explorer. The movement which started in November 2015 has already touched the hearts of over 1 million people in over 40 countries worldwide and counting.

Bid Specialists, AM Bid Services have been actively following and supporting The Tartan Explorer’s truly inspirational expedition since the beginning. Adventurously, they are now taking their support for the cause ‘up a gear’ and sending their very own, Bid Development Executive, Cameron Houston to cycle alongside Josh for the duration of one of his globe-trotting routes. Cameron is the youngest member of the AM Bid Services team, and at 24, is the same age as Josh.

Cameron will fly out from Edinburgh Airport on Monday, 3rd April to meet Josh in Nice. The pair will then set off for Monaco and from there will cycle nearly 400km across the south of France, finishing in Pisa in Italy’s Tuscany region.

Speaking of his upcoming cycle with The Tartan Explorer, Cameron Houston, said: “I’m really looking forward to spending time with Josh – I’ve followed his story along with everyone else, and being able to join him for a week will be an amazing experience. The route we’ve picked is great too – Josh has already planned everything in detail.  I appreciate the marvellous opportunity I am getting here and I’m very thankful to Josh, Andrew Morrison and our team for giving me the platform to do this. It will be a special week on my career bidding journey with AM Bid Services- something different and exciting!”

Speaking of Cameron joining him on this leg of the Cycle the World Expedition, Josh Quigley, The Tartan Explorer said: “AM Bid Services have been massive supporters of my challenge from the very beginning and I’ve always felt they were here with me in spirit.  With Cameron now joining for a week it means they will really be out here with me. I’ve cycled for the last 9,000 miles alone and I’m really looking forward to having some company and to share the experience for a short period.”

Impressed and invested in The Tartan Explorer’s passion for the cycle Expedition, Andrew Morrison, AM Bid Services, Managing Director said: “AM Bid Services have been supporters of Josh Quigley and his Cycle the World Expedition from the outset.  Josh is doing outstanding work raising awareness of suicide prevention amongst young people and our team takes considerable inspiration from his journey.  We are delighted that Cameron wants to show his support by spending a week cycling with Josh and getting first-hand experience of the Tartan Explorer Expedition.  We are also more than a little jealous of his route along the Mediterranean coastline of the south of France and northern Italy!”

To pledge your support to The Tartan Explorer please see and donate via the following link: http://tartanexplorer.com/#donate